Back to SPECIAL index page

In April 2000 the INTER-MODELLBAU in 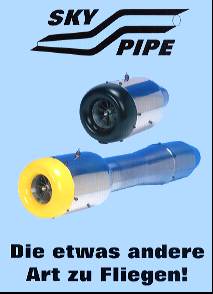 It was here that I spotted the stand of SKY PIPE, a German manufacturer of micro turbines and as far as I know of the first afterburner for micro turbines. Sky Pipe introduces 'The slightly different way to fly' with this add-on for their turbine.

SKY PIPE's president Markus Nasz granted Airtoi a special permission to use their leaflet for publication on the Internet.
So be aware that all photos and pictures on this page are copyrighted and may not be reproduced in any form.
Photos were made by Traute Meyer, Foto Spectrum, Oyten

The X80N is a 80 N thrust turbine (108x225 mm) that can be used on boats or model airplanes. It runs on A1, kerosine, diesel or even petroleum (white spirits). The complete specifications will be added to the Airtoi searchable SPECS database of all model turbines. This database will be available soon from the Airtoi Turbine-page.

The X80NB is basically the same turbine but adapted for use with the boost unit. The max RPM was reduced to 117,000. The XB BOOST unit can be attached to the X80NB turbine to gain extra thrust. Normal thrust for the X80NB is 68 N, but ignition of the afterburner increases thrust to 105 N. The Exhaust Gas Temperature (EGT) will then increase from 540 degrees Celsius to 700 degrees Celsius. That's why the afterburner may be used for only 20 seconds. You may use the extra thrust however up to 5 times during a normal flight. Switching on the afterburner will change the sound of the engine too. The sound changes from a normal turbine sound to a sound familiar to that of a pulsejet. The max RPM with the afterburner switched on is 113,000. The egine then has a fuel comsumption of 300-400 ml/min compared to 260 ml/min for the 'normal' X80N.

For all questions, additions and comments you might have, you may use the 'Jet related'-forum at the Airtoi forums

You may find this turbines in the Airtoi turbinespecs database, from the specs there is a link to the manufacturer